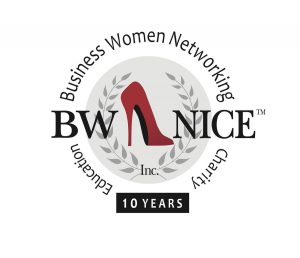 On Thursday, May 9th, BW NICE (Business Women Networking Involving Charity & Education) will be celebrating their 10-year anniversary. Attendees will include members from its sixteen chapters, past and present chapter leadership, their board of trustees, as well as local business and community leaders. This special event is going to celebrate the decade-long accomplishments of this women-based networking group that began with a Hunterdon County business woman’s vision to help others succeed in business, and, in life.

Diane Simovich, founder and president of BW NICE, was inspired to host a women-based networking meeting that involved education, as well as a charity component, after having a discussion with her good friend, Joe Dispenza. With his encouragement, Diane invited over 50 women from Hunterdon, Bucks, Warren and Somerset Counties to be a part of her inaugural meeting at Beaver Brook Country Club in the spring of 2009, which included a keynote speech by Senator Marcia Karrow. The concept of this group was well-received, and soon after the initial meeting, BW NICE, Business Women Networking Involving Charity & Education, was established. A unique female empowerment organization that blends the successful building of women in business with helping other women achieve their potential in life and profession began to meet on a monthly basis.

“Diane’s vision for BW NICE was something nobody had ever done before. Looking at it ten years later, she has cultivated this amazing brand into multiple chapters, which is an extraordinary accomplishment,” expressed Joe Dispenza, owner of Dispenza Financial, LLC.

“Bringing like-minded women together, beyond exchanging business cards, to be supportive of one another, and, to give to much-needed charities is fulfilling beyond measure,” said Linda Quartuccio, a BW NICE Corporate Ambassador and Co-chair of the BW NICE 10th Anniversary Celebration.

Since the launch of their first Red Shoe™ event in 2011, BW NICE has raised approximately $180,000 for their charity partners. They expect that number to increase significantly as they continue to experience chapter expansion into other parts of New Jersey, Pennsylvania, and now, Texas. The name of this event, The Red Shoe™, came from the BW NICE logo. It symbolizes unity, strength, and empowerment and honors the journey of those who have been impacted by domestic violence and sexual assault.

“It is heartwarming to see how BW NICE has grown these past 10 years and I’m so proud of what we have achieved! It’s an honor to work with such dedicated and passionate women who give of themselves each day in support of our mission, our charity partners and, most importantly, the women and families they serve. As we continue to grow, we will also continue to shine a light on all victims and survivors of domestic violence in order to evoke positive change in our communities,” said Diane Simovich, founder and President of BW NICE.

A key component of BW NICE’s 10-Year Anniversary Celebration is to acknowledge the many women that have volunteered their time to help this organization grow and develop into what it is present day. A representative from each charity partner, as well as the recipients of BW NICE’s Business Woman of the Year award, which has honored over 20 business women to date, will be in attendance.

The BW NICE 10-Year Anniversary Celebration is going to take place on Thursday, May 9, 2019 from 4:30-8:30 p.m. at The Ryland Inn, a historic property located in Whitehouse Station, New Jersey. For more information on sponsorship opportunities, or to purchase tickets, please visit: https://bwnice.org