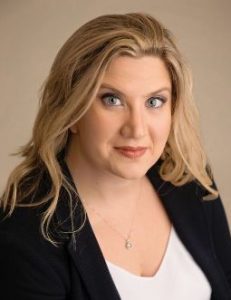 Melanie started life as a Jersey girl from Bloomfield but knew there was much more than Jersey in her life. Overcoming major adversity, and as a teenager who got rid of her wild streak early, she enrolled herself at Caldwell University where she Majored in International Business.  Between studies as a full-time student and her Reserve weekends she also waitressed and was an intern at ING Financial Services.

As soon as she graduated, she and her high school sweetheart rekindled their romance and married just a few weeks before she got to Afghanistan at Bagram Air Base. At the time, she spent almost two years as a marketing executive for a printing company and went to work at McGuire Air Force Base, as a personnel NCO, earning another degree in Human Resources. Then she left for Bagram Air Base and would communicate with Pat, who wondered why she’s call during target practice. But it wasn’t. It was bombing, and it was her job to go out there and be accountable for the people under fire.

She landed in Afghanistan in the early aughts, where her job, under fire, was to keep track of the troops so that if anyone was hurt, or worse, they could be brought back to base, treated and, if necessary, she made sure they could get home. Sometimes it was bad, and she had to find replacements for those who lost their lives giving America their best.

When she got home, she started her family and stayed at home to make sure everything was stable. As soon as she could, she went back to work as an action officer on an operations team with SMS Data Products contracted to the U.S. Army at the Picatinny Arsenal. Someone needs to keep the paperwork organized, just like the chef needs to feed the troops. It’s what keeps things moving.

Melanie started using Young Living Essential Oils about three years ago, and became so enthusiastic, she told her friends all about them, and they got excited, too. Next thing she knew, she was in business and has been growing it ever since. The best thing about it is that she presents the product, and suddenly people are happy that they have something that makes them feel good.

Realizing that networking is good for women, when Melanie was approached in 2016 to launch the Monroe County chapter of BW NICE, Business Women Networking Involving Charity and Education, she jumped at the chance. Though people tried to discourage her, she persisted, and now has a thriving group that meets monthly, supports one another and work on projects to benefit the local women’s shelter. The group meets the second Monday of every month, and it’s always fun and educational.  Melanie and her executive board work extremely hard to ensure the women of BW NICE Monroe County have a warm, inviting and effective networking environment.

Women’s Resources incorporated in 1980 and opened an office and a shelter for battered women in September of that year. Its mission is to end domestic and sexual violence for all women, children and men in our community.